skip to main | skip to sidebar

Two very special individuals in the world of auto racing are no longer with us. You may not have known Michael Hollander or Ron Meade. Media centers are a little less human due to their loss.

Ron Meade, who I first met at Daytona, was the kind of guy who was knowledgeable in just about any form of motor racing. In Meade’s last years he worked in Public Relations at New Hampshire Motor Speedway. If you ever wanted to discuss the events of the day, or bounce an idea off of someone in the business “Uncle Ron” was there. 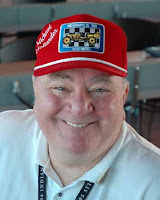 Hollander was a personal friend. I say the following with great affection, he may have been the first “computer geek” in the media centers of professional racing. When I first met him he was lugging a box full of electronics, it was almost 30 years ago. Laptops had not been invented. I believe he had a Radio Shack Model TRS-80. There were no disk drives for it. He loaded programs with a cassette recorder. For a monitor he had a portable black & white television.

Amusement turned to amazement when he obtained live results of races in far flung venues. Back then it was published on Compuserve which was eventually taken over by rival AOL. There were no “internet service providers” available at the time. His Racing Information Service developed a cadre of hard working unpaid or underpaid reporters who transcribed press releases and uploaded live race results. Graphics? Forget about it. It was all text, but, the world became a very small place thanks to Hollander and his reporters.

At first race tracks, like the Indianapolis Motor Speedway, scoffed at Hollander because it was an unknown media, and circulation numbers were unreliable. Credentials? Almost impossible, but Hollander soldiered on letting the slings and arrows of lack of professional recognition bounce off him like Teflon, long before Al Gore “invented the World Wide Web.” He didn’t have the status of the name reporters but he deserved it

You know how popular online chats are these days? Old hat to Mike. He was always beaming to me after a huge coup. Dale and Teresa Earnhardt came to his home, and because his office was not quite adequately set up, Dale did a live question and answer sitting on the Hollander family water bed unfortunately I’m not aware of any photos of that event.

Today the tangible forms of media are withering away in favor of immediate online news. It's not hype to say that Hollander was a pioneer in his field.

That doesn’t begin to scratch the surface of his other accomplishments in public relations in the automotive field or work with professional media groups.

Moreover all of that wouldn’t do justice to this warm husband and father. He was a great friend to many the first to volunteer assistance whether it be professional, or to demystify the latest gadget or get you connected to the ‘net.

Both these wonderful people made my life covering auto racing a pleasure and they, certainly, are missed.
Posted by Racingjourno at 11:34 AM

We share the opinion on nds card and I really enjoy reading your article.

Bright idea, hope there can be more useful articles about nintendo ds.

I love this ez flash vi article since it is one of those which truly convey useful ideas.

Great article, it's helpful to me, and I also like the useful info about dstti card.

Excellent point here. I wish there are more and more dstt card articles like that.

Good job for writing this brilliant article of m3 dsi.

This r4 article is definitely eye-opening and inspiring.

You have given us some interesting points on r4 dsi. This is a wonderful article and surely worth reading.

I greatly benefit from your articles every time I read one. Thanks for the r4 sdhc info, it helps a lot.

I like your ideas about ak2i cards and I hope in the future there can be more bright articles like this from you.

What an inspiring article you wrote! I totally like the useful acekard 2i info shared in the article.

Good job for writing this brilliant article of glasses.

Great article, it's helpful to me, and I also like the useful info about eyewear.

I appreciate your bright ideas in this eyeglasses online article. Great work!

Thank you so much for sharing some great ideas of cheap eyeglasses with us, they are helpful.

This cheap kids glasses article is definitely eye-opening and inspiring.

I am glad to read some fantastic child eyeglasses article like this.

I love this child glasses article since it is one of those which truly convey useful ideas.

I totally agree with you on the point of children eyeglasses. This is a nice article for sure.

What an inspiring article you wrote! I totally like the useful children glasses info shared in the article.

Your do have some unique ideas here and I expect more kids eyeglasses articles from you.

Great resources of kids glasses ! Thank you for sharing this with us.

You have given us some interesting points on kids sunglasses . This is a wonderful article and surely worth reading.

Bright idea, hope there can be more useful articles about unisex glasses.

I really like this unisex eyeglasses article, and hope there can be more great resources like this.

We share the opinion on unisex eyewear and I really enjoy reading your article.

I greatly benefit from your articles every time I read one. Thanks for the metal glasses info, it helps a lot.

This is the best metal eyeglasses article I have ever found on the Internet.

Excellent point here. I wish there are more and more metal eyewear articles like that.

It has been long before I can find some useful articles about plastic glasses. Your views truly open my mind.

To be a upright benign being is to procure a kind of openness to the world, an skill to trust undeterminable things beyond your own manage, that can front you to be shattered in very extreme circumstances as which you were not to blame. That says something exceedingly important relating to the fettle of the ethical life: that it is based on a trust in the uncertain and on a willingness to be exposed; it's based on being more like a weed than like a sparkler, something somewhat feeble, but whose mere particular attraction is inseparable from that fragility.

Great article, it's helpful to me, and I also like the useful info about

It can be concerned about on its suits for women way on to causal and also girly in some womanly winter coats for women clothing. Whilst these include either genuine worries, women could have the best of all possible.

In an article about NASCAR, one year after the death of Dale Earnhardt, Lipsyte wrote:

In the garage at Indianapolis

In a career spanning over thirty years, Lewis Franck, a former New York attorney, has covered motorsports first as a photographer working for magazines such as Sport Magazine and magazines in Europe. Subsequently switching to writing Franck had a monthly column in Inside Sports, and later worked regularly for Sports Illustrated and ESPN the Magazine. He's been a weekly columnist for Sports Illustrated's website.
As of February, 2008, he resumed his long-time relationship with ESPN as a motorsports contributor with a humor column
and chats during Sprint Cup races.

An award-winning journalist; he’s written thousands of articles for magazines, newspapers and websites around the world. He also was the US-based motorsports writer for Reuters newswire. In addition to published work, he’s been the color commentator, in Australia, for the local television broadcast of the Surfers Paradise Indy car race. Franck has appeared on the NBC Nightly News, television panel shows and dozens of radio appearances. He’s also the Eastern Vice President of the American Auto Racing Writer’s and Broadcasters Association. In addition he's a panelist on the
Driver of the Year Award.

In the shadow of a giant

With Bill France, Jr. in Kansas

Hardly work at all