skip to main | skip to sidebar

Rings all around a NASCAR Championship 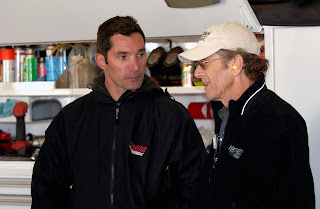 Daytona Beach,FL
This is an amazing little story, about Championship rings, for a quiet day at DIS.

Before heading out to the NASCAR Media tour at Lowe’s I was talking with Max Papis, the Italian-born driver, who is another former open wheeler attempting to make the transition to NASCAR. In addition to his driving skills ranging from Formula One to a Le Mans challenging Corvette, he’s married to Tatiana Fittipaldi, the daughter of two-time Formula One champ and Indy 500 winner, Emerson Fittipaldi.

Papis, who can be emotional at times, was excited to tell me that he had been given a championship ring by Hendrick Motorsports for his contribution in testing the COT on road courses.

That made me very curious. It turns out that everyone, that’s 550 people (actually more) got a ring honoring Jimmie Johnson’s Sprint Cup (then called Nextel) title in 2007 in the Lowe’s Chevrolet.

Ken Howes, Hendrick Motorsports vice president of competition, explained, “typically every full- time employee here gets a championship ring. That’s something Rick steps ups and does, then add on anyone who has contributed to the that effort. Max is one of them. He did a lot of work testing especially on the road course many laps at VIR (Virginia International Raceway) and Kentucky.” Howes added that David Green, who did yeoman-like work on the COT on ovals, was also given one of those priceless rings.

Papis said “it is an honor to be able to be part of the HMS family and give my contribution testing on the COT.I have been extremely impressed by the attention to details and by the great atmosphere that is in the team.

Before Christmas I went by the shop, sat down with Ken Howes, and while in converstion he passed me an envelope. I opened it and inside was a letter from Mr Hendrick. It said that thanks to the effort I put in in 2007 he was going to gift me with a Championship ring.”

He said tears welled up in his eyes.

Papis is scheduled to drive the #09 car for Phoenix Racing in the Sprint Cup series this year on the road courses and the #64 car for Rusty Wallace, Inc. on three road course races in the Nationwide Series.

As they say in Italian “saluti” to two class acts.
Posted by Racingjourno at 3:53 PM

I am regular visitor of this website[url=http://www.weightrapidloss.com/lose-10-pounds-in-2-weeks-quick-weight-loss-tips].[/url]You have really contiributed very good info here francktalk.blogspot.com. Do you pay attention towards your health?. In plain english I must warn you that, you are not serious about your health. Recent Scientific Research displays that nearly 70% of all USA adults are either fat or weighty[url=http://www.weightrapidloss.com/lose-10-pounds-in-2-weeks-quick-weight-loss-tips].[/url] So if you're one of these people, you're not alone. Infact many among us need to lose 10 to 20 lbs once in a while to get sexy and perfect six pack abs. Now next question is how you can achive quick weight loss? You can easily lose with with little effort. You need to improve some of you daily habbits to achive weight loss in short span of time.

I think youve made some truly interesting points. Not too many people would actually think about this the way you just did. Im really impressed that theres so much about this subject thats been uncovered and you did it so well, with so much class. Good one you, man! Really great stuff here. Here useful link:Tera Items Buy Tera Gold

It is because magic is going to kill microbes taking into High Heels shoes account a quicker healing process. Realizing all this, you can see that metalic truly does include houses which will use a optimistic participation in your wellness. Putting on a bit of sterling silver jewelry led faucet might not guarantee the best wellness, but it really will likely promote an improved one.

In an article about NASCAR, one year after the death of Dale Earnhardt, Lipsyte wrote:

In the garage at Indianapolis

In a career spanning over thirty years, Lewis Franck, a former New York attorney, has covered motorsports first as a photographer working for magazines such as Sport Magazine and magazines in Europe. Subsequently switching to writing Franck had a monthly column in Inside Sports, and later worked regularly for Sports Illustrated and ESPN the Magazine. He's been a weekly columnist for Sports Illustrated's website.
As of February, 2008, he resumed his long-time relationship with ESPN as a motorsports contributor with a humor column
and chats during Sprint Cup races.

An award-winning journalist; he’s written thousands of articles for magazines, newspapers and websites around the world. He also was the US-based motorsports writer for Reuters newswire. In addition to published work, he’s been the color commentator, in Australia, for the local television broadcast of the Surfers Paradise Indy car race. Franck has appeared on the NBC Nightly News, television panel shows and dozens of radio appearances. He’s also the Eastern Vice President of the American Auto Racing Writer’s and Broadcasters Association. In addition he's a panelist on the
Driver of the Year Award.

In the shadow of a giant

With Bill France, Jr. in Kansas

Hardly work at all